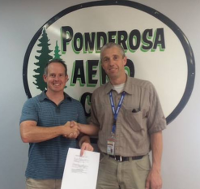 Even though he lives in Seattle Cuyler finds himself back at BOI to tag on his Commercial rating.  Always good to see you, just keep the slugs in Seattle!

Ya’ll know Sharki has been working on an instrument rating.  Well, to bring in the new year on Tuesday January 5th the checkride was taken.  Rumor has it the only slip occurred while preflighting.  She slid down the wing while disembarking the aircraft.  Given the option to reschedule she said no way.  The gash on the hand was tended to and the flight commenced.  Examiner was Greg Herbert.  Congrats! 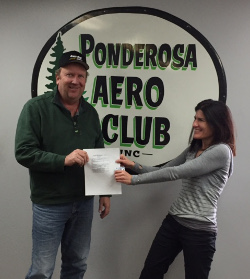 Another CFI from the Ponderosa ranks.  Adam adds some more acronyms to his ticket having earned his CFI and Advance Ground Instructor on May 29th. Arlyn Miller was his DPE.  Adam did all his training with CFII/MEI David Moler.

Brandon Jones was working to be a CFI before his 21st birthday, and he almost made it. Ten days later on April 29th Brandon Jones proved to DPE Greg Herbert that he knows his stuff. Brandon says he is currently accepting new students so he can share what he’s worked hard to earn.

February 25, 2015 Brandon added some more letters onto his certificate.  DPE for the checkride was Greg Herbert. 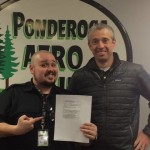