I saw this in action yesterday when a plane came back from flying and needed fuel before the next flight.  Line crew were already gone for the day (as they typically work from 13:00 to 16:00) and three members were in the office chatting.  These three members rallied to help the next pilot fuel the airplane, so she could get on her way.

The bottom line is that if you want an airplane ready when you get there, leave the airplane ready-to-go after you bring it back.  The Golden Rule (of Flying Clubs) results in positive member engagement, aircraft that are ready-to go, and overall happier members. 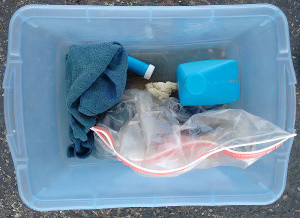 Do you have nightmares the night before a flight that involves finding a low oil indication on the dipstick during the preflight inspection thus requiring you to open up the tote and once again being confronted with a mini oil spill.  In our continual quest of improving members experience the process of adding oil has been tweaked.  In general the change is that any item that touches oil is immediately thrown in the trash and not stored in the aircraft.  The goal is to keep the tote clean and to not have any oil contaminated items in it.

Next time you have to add a quart expect to find a nice clean tote with two quarts of oil individually wrapped in a ziplock bag.  Affixed to the bag are instructions and inside you will see disposable shop towels for cleaning hands and oil spills plus a paper funnel.  Now read close – here is the drill.  Remove the quart of oil from the bag, remove its’ cap and set aside within reach.  Take the funnel and place in the oil filler tube applying light constant pressure to it.  With your free hand pour the oil in the funnel.  Now here is the big change, drum roll please  – the empty oil container goes directly to the nearest trash can.  Do not pass Go, do not collect $200 but go immediately to the trash can by the fuel pump or the one near the north end of the shade hangar.  Along with the empty oil container throw away the funnel and any paper towels used.  Can you see the theme here?  We do not want any oil contaminated items placed back in the tote or airplane.  Finally, remember that tail number marked bag you took the oil from?  That is what you take in after your flight and drop off on the desk.

Now you can lose sleep over something like not remembering to close your flight plan.